164 injured in violence at Jindal Steel and Power Limited in Angul, Odisha

Security men belonging to Jindal Steel and Power Limited (JSPL) company at Nisa, 15 kms from Angul in Odisha, brutally attacked 160 villagers, many of them women, on 25th January 2012. 164 people have been injured, 14 of them seriously. The JSPL security men attacked the villagers with sticks and iron rods.

JSPL acquired 6,400 acres land in Banarpal and Chhendipada block of Angul district and began construction work in 2006. More than 1 lakh people, approximately 25,000 families of 40 villages, have been affected by the steel plant that is under construction. During the acquisition period, JSPL assured a permanent job, skill development training, compensatory allowance to the unemployed and elderly, proper resettlement and other periphery development facilities to the displaced.

As of today, JSPL has only fulfilled one of the above promises – a compensatory allowance of Rs.2700 per head to about 3000 affected persons. No livelihood or resettlement options have been put forth with the company even failing to employ anyone from the area.

The situation deteriorated rapidly when JSPL stopped the allowance payment, water supply and other facilities in the affected villages once the boundary wall of the steel plant was completed. There was no prior notice of this move that occurred three months ago.

Repeated complaints by the affected to the company authorities, the Angul district administration and the state govt. against this arbitrary action of JSPL yielded no action. An attempt by people from Kaliakata village to meet the company authorities on 19th January ended with the security guards misbehaving with the villagers and assaulting a pregnant woman. The affected villagers decided to stop construction work following which the company and concerned govt. officials promised a meeting with the villagers on 24th at Bada Kerejeng Birankeswar temple to discuss a way forward. The company and administration officials did not turn up at the said date and time. 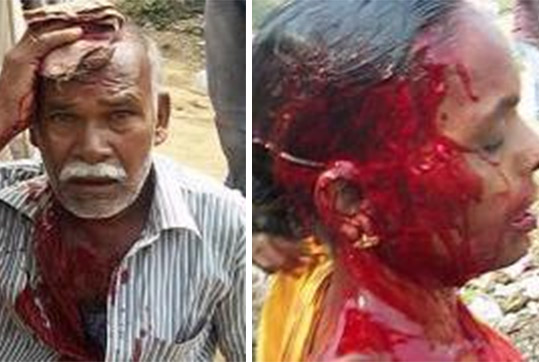 Sequence of events on 25th January

About one thousand women and men of the affected villages arrived at the Subarnpur gate of the company to meet the company authorities. JSPL security forces, district and local police (Nisha Silpanchal Police Station) and the magistrate were present at the venue. No sooner had the people entered the premises than the company security forces started to attack the women, men and children. Women were stripped and beaten ruthlessly with iron rods.

Some of the security men inserted iron rods into the private parts of the women who were bleeding profusely (as witnessed in this video). A 3 year old child was also severely injured.

The police did not extend any help for the injured patients who had to be carried and admitted in the Angul hospital by the villagers themselves. Some of the people who were grievously injured were sent to Cuttack and Bhubaneswar hospitals.

Most people injured in the incident have been lying in the verandah of the Angul district headquarter hospital and are yet to receive proper treatment.

The movement led by the mass organisation Birankeswar Silpanchal Kshyatigrast Prajasangh, Angul, continues. Their demands are fair compensation for their acquired land, stable livelihood, free medical care at the JSPL hospital and electricity to their villages.