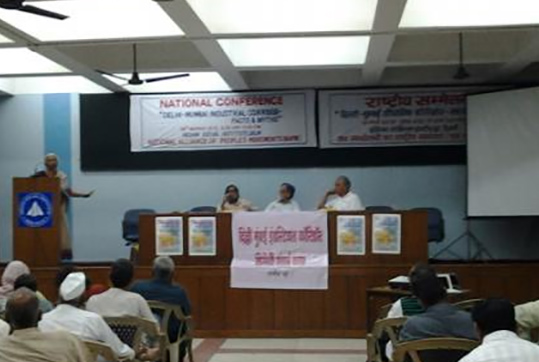 The DMIC Virodhi Sangharsh Yatra culminated today with the National Convention on the DMIC – Facts and Myths to share new information gathered enroute the yatra, analyse outcomes and devise a strategy for further action, and was attended by activists, supporters and experts.

Opening the session, Manoranjan Mohanty applauded the yatris in spreading awareness about the DMIC. “Very few people know of the DMIC corridor. Yatris are responsible for bringing this to the media’s attention.” He further said that land acquisition and the development model were two issues which should be put before voters with elections around the corner without letting it become a propaganda tool for political parties to use.

Medha Patkar critiqued this kind of forced development, which she called ‘aggressive progress’ which furthers interests of cities alone. “The current land bill has included everything from highways to damns under infrastructure … people are still without roads and toilets.” She further stated that the idea of this need for infrastructure has been propagated effectively. Most speakers commented on the sheer size and complexity of this project.  “People have been fighting battles against SEZs, railway tracks, power plants little knowing that they were fighting the DMIC. Even the Principal Secretary in Maharashtra said that he knew no more than we do, that too from the website.”  All 6 states have been doing the groundwork irrespective of ruling party – legal changes being brought about to legalise the loot and blanket clearances over labour laws, land acquisition laws, environmental compliance rules for smooth implementation of the DMIC.  “But no project is possible without people’s participation,” she said ending with triumphant “Kheti Bachao, Desh Bachao!”

Vikram Soni shared a presentation over water security illustrating the grave situation of water scarcity and availability especially in the DMIC regions. 5% of increasing sea levels is attributed to India’s lost groundwater alone! The strip between Mumbai and Delhi is also the driest in the country; it is seriously water stressed as most of its groundwater has been withdrawn. This makes the question of water availability for the DMIC a pertinent question. “Leave alone rights, we’re talking about survival,” he said adding that Water Acquisition must also be added to people’s agenda.

The first session saw representatives from each of the 6 states come and speak to the audience. Representing Maharashtra was Ulka Mahajan  of  Sarvahara Jan Andolan. She said that “There has been no talk of this project at the parliament or legislative assembly level. Gram sabha is still a long shot. When we started calling MPs and MLAs, they did not even know about DMIC. How can such a decision be thrust upon us without any discussion whatsoever?”  Till today, under the name of MIDC, which is a state corporation, 13 lakh acres has been acquired. Then there’s also JNPT, CIDCO and various other industrial bodies that facilitate the same. From RTI applications we found that 229 MIDC industrial areas have been established about which we are extracting information.  Of these 80% plants are currently shut. People who have been rendered landless because of this acquisition are in the same situation without any improvements or employment through this development. “If we are in the affected area today, what about all the people who are already in line waiting for employment? When will they deal with the displacement here? As per the census report of 2007 and 2008, 4.5 million medium, micro and small industry units have been shut. By bringing in mega industries 2.25 crore livelihoods will be directly hit. And they have stated that 3 lakh jobs will be given. How does this compare at all?”

Busting the myth of “Vibrant Gujarat” Krishnakant revealed that most of the DMIC nodes were already being developed and today, are some of the most polluted, have high unemployment figures and low standards of living. “There is talk of international standards when it comes to PPP projects but when it comes to land acquisition, even Indian standards are not followed. People are still awaiting compensations and laws are bent”. “Hum ek inch zamin dene wale nahin hain!,” declared Ram Krishna Alhawas representing Haryana. Expressing discontent over lack of basic amenities like clean drinking water he said that Haryana is the face of the DMIC and that the people of Haryana will not let it proceed any further.  Similar sentiments were expressed by Hiramand Shinde (Sinnar), Balwant More (Nanded) and Prasad Bagwe (Karla) .  Umesh Tiwari from Madhya Pradesh called it “the biggest land acquisition in the history of the world. If we do not fight, we risk being looted.” Upendra Rawat from Delhi said “Before the loot of land, what does the government do? First it quashes the powers of the panchayat and then it creates a law to recognize the rights of the panchayat” referring to the process by which NCR regions were established in Haryana and Uttar Pradesh.

The second session saw members K.B. Saxena (former secretary GOI), Abimanyu Shreshta (lawyer Supreme Court), Himanshu Damle (financial analyst, Bank Information Centre), Soumya Dutta (environmentalist, BVES) and Swati Sheshadri (Researcher,  EQUATION) presenting brief analysis on the legal, environmental, financial aspects and on the land acquisition act and even tourism as a land grab tool.  KB Saxena interestingly pointed out that land acquired through private transactions and is outside any control hence should be looked into at length. Soumya Dutta talking about the environmental aspect focused on the spillover effects of additional factories being set up to provide resources for the DMIC industrial belt. On the legal front Abhimanyu Shreshta pressed on the point of raising objections as soon as notifications are received, otherwise there might not be a chance to do so later while Himanshu Damle suggested  putting pressure on the IIFCL (Indian counterparts of the Project Development Fund) to share their safeguard policies in a transparent way. Ending the second session was Swati Sheshadri’s presentation on tourism. She spoke of inevitable recreational setups like hotels, golf courses etc. to cater to the industries. Since tourism requires small sizes of land, and is acquired through private transactions,  it evades most acquisition laws, environmental clearances and others.

The session closed with a discussion on steps to be taken next and formulation of a multi-action plan for coming months leading up to the 2014 elections.

For previous details, press releases on the Yatra – http://napm-india.porg/pressreleases