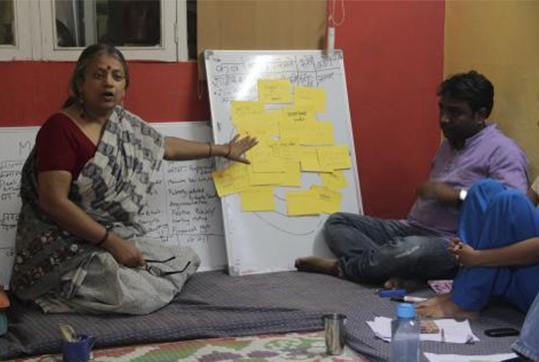 An account of the recently held workshop on gender from SRUTI Intern, Namrata Neogi.

Viewing the current escalation of cases of atrocities committed against women from diverse socio-political spectrum, a need for deep seated introspection on the root problems of these crimes becomes imperative.

A gender sensitization workshop held in SRUTI from 4th – 5th October, 2012, deftly conducted by Purwa Bharadwaj,  an active worker  on Gender issues, comes at an important time when issues of gender, equality, sexuality and power politics in relationships are being widely discussed and debated at different forums, yet with unsettling  results and tormented consciences. Starting off with a story reading exercise among the participants, followed by a discussion involving everyone in the dialogue process, the gender sensitization workshop over the course of two days became curiously intense and myth shattering.

The event saw the participation of a diverse group cutting across age, gender and identity sensibilities. What was considered as the issue of gender being universal and hence “understood” by almost everyone, the workshop completely jolted our imprinted notions and gave us the space and time to rethink our ideals, digging deep into what and how we actually think, into our very own personal lives and experiences, how we have been intricately shaped by the society we live in and how victimized everyone is in this system.  Meticulously mixing small activities followed by intense discussions, the workshop has clearly helped in shattering myths, stigmas and stereotypes, in the process broadening our mental horizon.

Linking power, control over resources and sexual dominance, Purwa Bharadwaj had meticulously woven the story of how the concept of gender is shaped by digging deep into history and tried to reveal the real truth behind every small action done, said or committed which is often termed as “societal norms” for males and females respectively. The first day saw a subtle shaking of everyone’s perceptions, a precarious step towards breaking the ice among the participants of the workshop. However the second day saw a greater focus on issues where detailed discussion on patriarchy, power, control over resources and dominance of sexuality were focused. Issues of societal perceptions towards transgender, homosexuals and other “marginalized” groups were openly discussed and honest views from everyone were sought. This was when Purwa Bharadwaj talked of challenging these established views and perceptions and tried to deconstruct the real identity or image of them, thereby concluding that differences between these “marginalized” groups and the rest of the “normal” society are nil and that the difference lies in the way we perceive them or the way society views them. This revelation was like peeling a mask from our eyes and tremendously elevated everyone’s minds. Setting foot on troubled waters, Purwa Bharadwaj also brought up unsettling issues on the institution of marriage and a vortex of underlying questions and various forms of relationships among humans were addressed and views from everyone were openly sought and discussed.

Becoming an emotional confrontation and a journey for everyone, the workshop ended on a heavy note with a huge convoy of thoughts for introspection and at the same time enlightening everyone’s minds. It was also decided that this workshop should be extended to the field on priority.