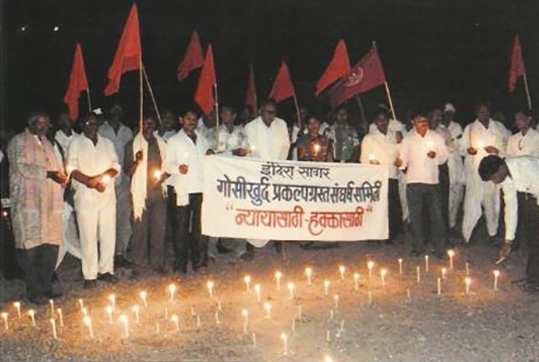 Relief at last for people displaced by 25 year old dam

Marking a culmination of 17 years of struggle by Gosikhurd Prakalpgrast Sangharsh Samiti headed by SRUTI Fellow Vilas Bhongade, the Chief Minister of Maharashtra announced a relief package of Rs.1200 crore in May 2013, for those affected by the Gosikhurd dam; Maharashtra’s largest irrigation project in Bhandara district near Nagpur.

The 25 year old incomplete project has been ridden with complaints of large-scale contractor corruption, stalled environmental clearances, financial mismanagement and utter negligence of the almost 1 lakh population affected by construction of the dam.

Initially approved at a cost of Rs.372 crore in 1982, the estimated project cost has escalated to Rs.13,000 crores over the years, with Rs.6000 crores having been spent so far. Despite being accorded national project status in 2008, the dam has managed to irrigate only 34,000 hectares of the projected 2.5 lakh hectares of land, in the three water-starved districts of Bhandara, Chandrapur and Nagpur.

As per the declared package, Rs.2 lakh per hectare will be given to 25,246 land owners and 3,363 landless labourers. Those eligible for State government jobs and have remained unemployed are entitled to an additional Rs 2.90 lakh as compensation. Project affected persons will also receive additional funds for rebuilding houses and cattle sheds that were inundated by the dam reservoir.

The ambitious project, when announced, was welcomed by local people who were ready to sacrifice their land and homes for the betterment of the drought-prone Vidarbha region that severely lacks irrigation infrastructure. However, inordinately delayed, and mired in corruption, the Gosikhurd dam has so far failed to provide respite to a region infamous for drought and farmer suicides. Gosikhurd Prakalpgrast Sangharsh samiti’s struggle was initiated against this very injustice. Under the leadership of Vilas Bhongade it raised the issue of corruption and consistently followed up on asserting the rights of the affected population. Towards this, the sangathan, has pioneered innovative forms of peaceful dissent in the region to highlight the usually ignored aspects of displacement that project affected people face, such as deprivation of resources for cattle rearing, grazing and even space for cremations.

With the growing problems and long-term effects of large unviable dams, diversion of water for industrial and real-estate purposes and lack of any sustainable vision for water management Vilas Bhongade has made the preservation of the river and linked water management a key focus of his work with the community. Foreseeing the alienation of common people from their key resource of river water Bhongade undertook a ‘River Yatra’ in 2012 to engage with the communities that live along the river, map the traditional culture and dependence on the local river systems, and raise awareness on the conservation and equitable use of this precious resource. With this ‘yatra’ he initiated the Dr. Babasaheb Jal Sansadhan Parishad, a collective of people, envisioned as a council on holistic and sustainable water resource development, with the community as key stake holders.

The long years of persistence has paid off, with the declaration of the Rs. 1200 crore package. With this victory for the people, Vilas Bhongade and the Gosikhurd Prakalpgrast Sangharsh Samiti are now focused on the crucial concerns of sustainable management, conservation and equitable sharing of the river resource. 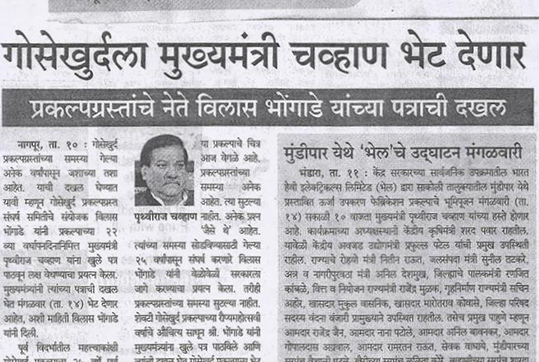 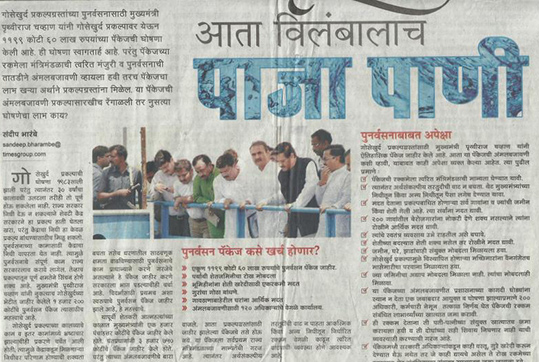