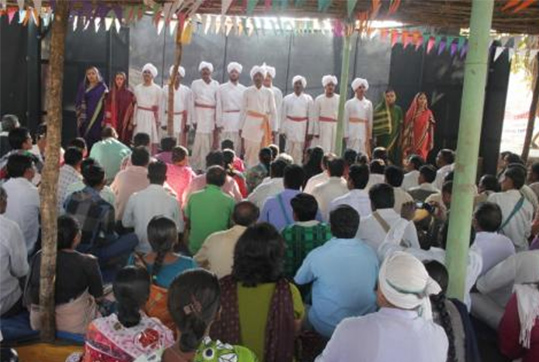 We were treated to an inspiring performance of ‘Satyashodhak – The Truth Seeker’ directed by Atul Pethe, on 28 February 2012, at the SRUTI Sathi Milan in Sane Guruji Samarak, Mangaon, Maharashtra. It was an extraordinary experience to watch the play, impeccably enacted & produced, under two massive banyan trees, along with nearly 150 grassroot social karyakartas from 12 states in India.

This unlikely viewing of the play was made possible when Ulka Mahajan of Sarvahara Jan Andolan, Raigad requested Atul Pethe to bring this production to the remote, rustic location of the Sane Guruji Samarak – a simple but sprawling retreat, flanked by dry hilly terrain and teak trees. One could just visualize the flood of life and greenery that would spring forth here with the first touch of rain! Nearly 200 people, from across India, had gathered to attend the 3 day meeting of Fellow groups of the Society for Rural, Urban and Tribal Initiative – SRUTI.

Here beneath two massive banyan trees – sentinels of another time, while an evening of songs and recitations were under way, a few frames were quickly put up to allocate the area for the performance. Swiftly executed by a handful of people – before half the music evening was done, a set was up and waiting. The troupe arrived in the wee hours of the morning.

A quick breakfast done, the Sathi Milan participants moved to the shaded area to await the performance. Within minutes, the play, the director and the cast were introduced and the performance had begun.

One would have imagined that a performance staged with so little fuss and backup would obviously be compelled to cut corners and simplify its production. We were ready for an informally strung together narrative performed for an informal audience sitting on tarpaulin sheets under the shade of large banyan trees…Exciting venue, but definitely a challenging one, production wise.

However as soon as the chorus filed in and took their place, and the lead voice took over the initial role of sutradhar we were transported into a space of creative excellence which reached far beyond barriers of language and logistics. The form – energetic local folk theater – reflected the theatre medium used originally by the Satyashodhak Samaj, in its time.

Based on the life of Mahatma Jotiba Phule and his courageous wife Savitribai Phule, the play written by Professor G P Deshpande, is an effort to interpret and relate the thoughts of the Satyashodhak (Truth Seeker), to our times. The narrative, strung together with effective songs, spontaneously interwoven dance and drama, reached out to the multilingual audience with its message of struggle against oppression, discrimination and injustice.

The stellar performance by the cast was heightened by the fact that most of the artists in the play were not practicing theatre artists, but in fact municipal and sanitary workers of the Pune Municipal Corporation. The precise delivery, impeccable body language, costume presentation, scene changes, and charged emotive performance left us moved and inspired. There was no evidence that this performance was the result of a 6 month theatre workshop conducted by Atul Pethe for the Pune Municipal Corporation Workers Union. The professional edge of the production would lead you to believe each member of the cast and crew were actually experienced theatre professionals. There was not a slip in the flow of the play, and not a contrived moment. Kudos to the effort, at every level!

Also, this particular staging of the play held special significance as it reached out to a wealth of minds devoted to working towards a more just and equitable society across India.

India is steadily growing to be a schizophrenic democracy; riven with the split realities of a shining emerging superpower on one face, and an increasingly impoverished, exploited, dispossessed one, on the other. With the socially divisive factors and inequities at work in the world today – SRUTI’s role in supporting issues of equity, justice and social change in India is becoming increasingly relevant. Recent trends of economic growth in India, clearly indicate the concentration of wealth and resources in the hands of few, at the cost of the majority. This has led to a spate of struggles across the country – a groundswell of anger, resistance and­­­­ in many instances, bloodshed – leaving people alienated, dispossessed and gravely resentful. In these inherent inequities – of transaction and transfer of resources, and the entrenched patterns of those empowered to take – and those forced to give, lies an uncertain future riven with injustice, unrest and inevitable violence.

The objective of the SRUTI Fellowships is to peacefully & productively counter this alienation and dispossession at different levels; mobilize and create awareness & perspective, build local leadership and initiate the enabled participation & collaboration of marginalized communities in key democratic processes – providing them access to opportunity, entitlement, justice & dignity. From food security to education; access to natural resources to in situ livelihood generation; land alienation to urban concerns; untouchability & gender inequities to farmer & labour issues, good governance to gram sabhas…SRUTI Fellows engage in a wide range of issues & activities focused on community development, across rural and urban India.

For this reason, the Satyashodhak performance for this collection of people was a special exchange. The audience comprised veteran and young grass root social actors from the states of Uttarakhand, Delhi, Rajasthan, Bihar, Jharkhand, Madhya Pradesh, Maharashtra, Chhattisgarh, Orissa, Andhra Pradesh, Karnataka and Tamil Nadu. Despite some loss in translation and context, the message of the play was delivered powerfully – and it found deep resonance in the multi-regional audience that witnessed the performance. This special viewing and location, beneath the mighty banyans at the Sane Guruji Samarak, in fact resonated deeply with the idea of movements born on the ground. Several, perhaps born under the shade of historic banyans in far away villages; born from collective thoughts of doers in history who have transformed the fabric of society with their seeking of truth and justice.