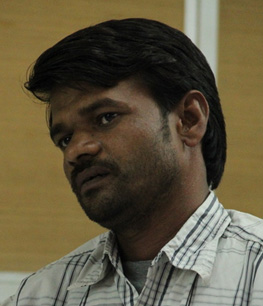 Bundelkhand is a region that lags behind on several socio-economic indicators. Prone to frequent droughts with majority of the agrarian community living off subsistence farming, the area is also witness to widespread practice of untouchability and overall marginalization of dalits, adivasis and women. It was here that Lakhan Singh founded Bundelkhand Mazdoor Kissan Shakti Sangathan (BMKSS) in 2003, to work towards the empowerment of oppressed groups. BMKSS has primarily taken on issues of access and control over forest resources and livelihood in these challenging conditions.

The presence of Nauradehi Wildlife Sanctuary and its demarcated buffer zone have added to the woes of locals who are regularly subjected to harassment and even eviction. Using the Forest Rights Act 2006, the sangathan has been challenging these atrocities and demanding cultivation and NTFP rights of forest dwelling communities as guaranteed by the Scheduled Tribes and Other Traditional Forest Dwellers (Recognition of Forest Rights) Act, 2006. The sangathan challenged the corrupt collusion of administration and feudal families that had misappropriated essential development funds meant for public infrastructure like education, health and transport. Singh became a SRUTI Fellow in 2007. The sangathan has been trying to leverage better prices for agri production and working on marketing of forest produce, attempting to curb monopolies and unfair trade. They have effectively fought the shortsighted takeover of people’s issues by political parties and mobilized people for long lasting collective action in the area.